Ear Infections — Why Are They So Common In Kids?

Ear Infections are the most common bacterial infection in children, and account for a substantial percentage of all visits to a pediatrician’s office. Why is that? This article will help you understand why. We will also briefly discuss antibiotics for ear infections as well the use of “tubes” for children who keep having them.

An understanding of the anatomy of a child’s ear, and how it differs from that of an older child or adult, is critical to understanding why ear infections are so common. 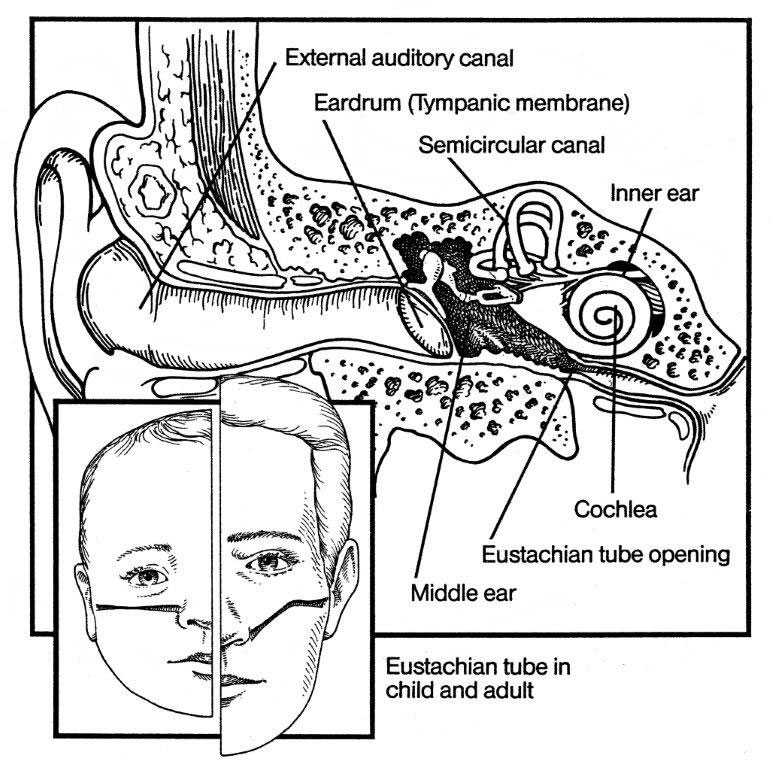 Children less than 7 are far more likely to have ear infections because of 3 features unique to the Eustachian tube of children:

Let’s take these one at a time:

The official term is patulous, but when the tube is too floppy, it allows mucous and germs to easily migrate from the area of the nose up in to the middle ear space, setting up the conditions for an ear infection. Further, the floppy tube can easily collapse, making it difficult to ventilate the Middle Ear (a major role of the Eustachian Tube). Once the tube collapses, it, like a collapsed balloon, is very difficult to re-open.

It is ineffective in preventing the migration of germs and secretions from the nose to the middle ear. One author likens this situation to that of the short urethra of girls, which predisposes them to urinary tract infection.

Inadequate Tilt of the Eustachian Tube

This means that when the mucous lining of the Eustachian Tube produces secretions during a cold, the child is unable to adequately drain those secretions, producing a middle ear effusion, or fluid collection. In addition, inflammation of the Eustachian Tube lining as a result of the cold essentially swells the tube shut, making it impossible to drain the effusion.

An ear infection, or Acute Otitis Media (AOM) results when bacteria “swim” into this pool of trapped fluid in the middle ear space, soon joined by pus cells the body has sent to try and kill the bacteria. What was often a painless process (just effusion), with decreased hearing being the primary result, quickly becomes a very painful affair, capable of waking children out of a deep sleep.

Just a few words about treatment of ear infections

Though several antibiotics can be used to often dramatically reduce the immediate ear pain and resolve the acute infection (though not the effusion that set it up), 80% of ear infections will clear spontaneously.

The American Academy of Pediatrics therefore recommends that if a child is older than 6 months and presents with pain for less than 48 hours, the Observation Option may be considered. Who qualifies? Any child 6 months or older, whose pain is manageable with ibuprofen or acetaminophen, and who does not have a fever above 102 deg, F or otherwise appear ill. The use of antibiotics may then be delayed until the pain has persisted for 48 to 72 hours, or immediately if high fever or severe pain develop. I love the observation option, because it can significantly reduce antibiotic use.

Tympanostomy Tubes (ventilation tubes) are often recommended for children who have had recurrent ear infections for a period of time; I start considering them when a child has had at least 3 ear infections over 6 months, or if fluid remains in the Middle Ear for 3 to 6 months, especially if there is apparent hearing loss or speech delay.

The tube works by ventilating the Middle Ear when the child’s Eustachian Tube can’t do the job. A properly ventilated tube keeps germs from being sucked into the Middle Ear.

This all gets a bit complicated in a hurry, so it’s hard to generalize across all children. The fact remains, however, the Eustachian Tube Dysfunction (poor function) is the primary reason that young children have so many more ear infections than older children and adults.

Constipation in Children — Will it Ever Get Better?