Is Conversation Endangered in the Digital Era? 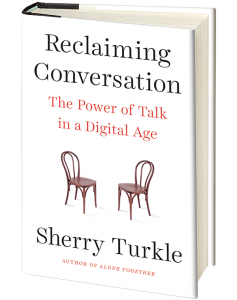 As I prepare to retire at the end of this month, I wish to share some reflections and concerns which arose from my reading of a rather profound book, Reclaiming Conversation: The Power of Talk in a Digital Age, by Sherry Turkle, Ph.D., Abby Rockefeller Mauze Professor of the Social Studies of Science and Technology at MIT (Massachusetts Institute of Technology), published in October 2015. Dr. Turkle has spent her entire academic career studying the impact of technology on human behavior.

Early in her book, Dr. Turkle states, “We are being silenced by our technologies—in a way, ‘cured of talking.’ These silences—often in the presence of our children—have led to a crisis of empathy that has diminished us at home, at work and in public. I’ve said that the remedy, most simply, is a talking cure. This book is my case for conversation.”

But sadly, our preoccupation with our technologies prevents many of us from experiencing solitude, let alone enjoying it: “Recent research shows that people are uncomfortable if left alone with their thoughts, even for a few minutes….We are so accustomed to being always connected that being alone seems like a problem technology should solve. And this is where the virtuous circle breaks down: Afraid of being alone, we struggle to pay attention to ourselves. And what suffers is our ability to pay attention to others.”

So does this mean for our children, right now? First, per Dr. Turkle, there has been a 40 percent decline over the past 20 years in markers of empathy among college students. Second, as we adults (our children’s’ parents) spend more time in the presence of our kids on devices, we, by definition, are spending less time talking with them. And, as Dr. Turkle notes, “Studies show that when children hear less adult talk, they talk less.”

So do we really want to settle for “continuous partial attention?” Do we need to continuously “rescue” our children from their boredom, or might we attempt to carve out times each day, (suggestion, start with 30 minutes and work up from there!) where we make those attractive phones and tablets off-limits. The result might be a desperate cry of “Boredom!” Yet, as Dr. Turkle points out, as we allow our children a capacity for solitude, this enables them to let their minds wander, set their brains free. “Our brains are most productive when there is no demand that they be reactive.” She goes on to say that “childhood boredom is a driver. It sparks imagination. It builds up inner emotional resources.

If placing a mobile phone on the table in the middle of a group of adults substantially reduces the amount and the depth of the conversation, wouldn’t it be a great idea to simply make mealtimes a device-free zone?

Faithful reader, your first reaction to these observations is that they likely don’t apply to your interactions with your children. If that’s true, I applaud you for taking a stand, and limiting the potentially pervasive influence of digital devices on our children’s generation. You are, sadly, in the minority. For according to Dr. Turkle, a study in 2010 of 55 adults watching over their children as they ate meals together in fast-food restaurants showed that “across the board, the adults paid more attention to their phones than to their children. Some adults interacted with children intermittently; most withdrew completely into their devices. For their part, children became passive and detached or began to seek adult attention in futile bursts of bad behavior.”

And if your children are older, you should know that “a quarter of American teenagers are connected to a device within five minutes of waking up. Most teenagers send one hundred texts a day. Eighty percent sleep with their phones. Fourty-four percent do not “unplug,” ever, not even in religious services or when playing a sport or exercising.”

Our devices are marvelous inventions of technology, which allow us to stay connected, efficiently obtain information, and even remarkably aid people like me in rapidly making decisions. But in their very indispensability lies the challenge for every caring parent: Will I commit my time, undivided, to them, as much as possible? Will I try to monitor my use of devices, and see if there are times when I’m doing too much multitasking? And finally, will I commit to allowing my kids to be kids as long as possible, allowing them to experience the joys of toys, and books that offer none of the titillation of the electronic devices they so crave; will I permit them “isolate play,” where they can just sit on the floor and imagine monsters and dolls and trucks with their blocks or Legos. May boredom not become the “B” word at your house; may it instead be the driving force behind your child’s emerging creativity.

While these ideas are still rolling around in your brain, I suggest you take a few moments to consider some “household guidelines” for digital devices. Try to be honest with yourself, assess how much your own habits might be interfering with valuable conversation time with your kids, and make appropriate revisions.

And think of some family rules, like mealtimes being device-free zones, limits on total hours a day on the devices, where the devices are when children are asleep (not in your kids’ beds or probably, not even in their rooms). Pushback will come, but your children’s ability to have meaningful conversations with and empathy for others will flourish! 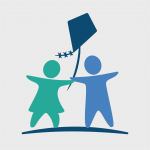 Reading to Your Child — A Really Big Deal!